4 weeks! You know, I honestly don’t know whether I feel like the year has barely begun or like it has been going on forever.

These past 2 weeks were interesting.

2 weeks ago I had to have a cyst cut out of my neck – very interesting experience – only needed local anesthesia, so I was awake, but didn’t really know what was going on, which is surprisingly annoying.

Apparently it was a rather large cyst – the doctor kept going on about the size – the hole it left was about 2cm deep I believe.

That made life a wee bit interesting – thankfully due to painkillers I didn’t have a lot of pain, just uncomfortableness.

Hubs and I started a diet – calorie counting since apparently that is the best for fussy eaters – 2 weeks later and I’m 1.5kg down and he is 2kg down – not bad if you take into account that we can eat most of our favourite foods plus chocolate and fizzy drinks (which are mostly for the hubs)

I was also a bit annoyed, because I thought I was doing so well with drinking only one caffeinated beverage a day and almost no fizzy drinks, which I replace with iced tea – guess who forgot that normal tea contains caffeine?

Absolutely no progress on my crochet – I got to a point where I got demoralised because it looks like my idea for a pattern won’t work and then on top of that my neck being injured – I just have not been in the mood to crochet.

Hmm…what else (I really should have more pictures to make this post more interesting, but I suck at taking them)

Hubs and I look hilarious walking around in the shops scanning bar codes of items – we use myfitnesspal for counting calories and they have a bar code scanner that will pick up the food if it is in the database – very useful!

And lastly – we did something that will either be really stupid or really good – we bought a treadmill! We discovered on Friday that cycling while watching TV works quite well. And on Sunday we saw a treadmill on special – loved it – and I’ve always wanted a treadmill – and voila we bought one!

Bummer though is that we have to wait until Wednesday before they deliver it(it was too big for the car) – but I can’t wait! Planning on doing C25k…weeeeeeeeee

Enter your password to view comments. | posted in Uncategorized

Is it just me, or did this past week go by really really quickly?

I was astounded when all of a suddend I found it to be Friday last week (happy, but a wee bit surprised)

I don’t remember a whole lot about the week actually, I know I didn’t make a lot of progress on my crochet and then having to start working squares together this weekend, my interest level drop quite a bit – something I have to work through – I think I’m just at a point where it feels like the pattern either won’t work out or that it will be way too much effort in the end (those dreaded edges! I’m glad I’m not alone in that)

Hubby and I had a lot of fun playing borderlands – we’re almost done with the campaign after which we might do a second play-through.

Habit/goal-wise the week went well as you can see below:

I did end up adding two more goals,things that I think will improve life a bit and isn’t too much effort to end up  making it too much too soon.

I also bought this really cool mouse-pad planner on Friday – you can plan your whole week on it! It’s mostly for work, so not much exiting will go on it – I just love various forms of stationary.

Not a great photo unfortunately

(not sure why the photo is sidey-ways, but oh well)

I’m not sure what I want to accomplish this week, but I am starting to think more and more that it is time to be more intentional about life – setting goals for each week and accomplish them, not just floating through life and being.

Anyone have anything interesting planned for the week?

Working away ends is by far the most tedious part of crochet in my opinion – it frustrates me to no end.

I can be all happy about finishing a project, only to realise that just because the crochet part is done, doesn’t mean the project is done – and sometimes that stops the project right there.

My current blanket includes quite a lot of ends and I’m not looking forward to having to try to hide them.

And then you get the problem where the ends don’t necessarily stays hidden, they start to peek out after a while – not nice either.

I suppose it is possible that I’m doing something wrong, or that there is an easier way to work away ends that I just don’t know about.

How do you work away your ends?

I am borrowing this idea from  stiches, scraps and sparkles in the sun and by some luck can combine it with the new stashbuster challenge from Linda’s crafty corner

It just so happens that my current WIP uses up some of my stash – it is awesome to be able to use “existing” yarn for something like a present. I have to admit that most of the time it is more exciting to do projects that require me buying new yarn or yarn other than acrylic, but I suppose that the “newness” in this project is that I’m not following any pattern, but making it up as I go.

This is how far I am at the moment: 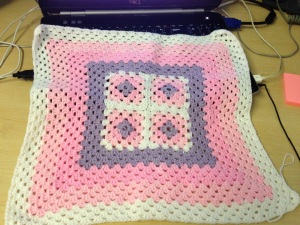 I’m going to add these blocks around the border:

And then do the granny rows in the opposite colour sequence from previously. Then depending on the size of the blanket, I might do a granny edge that alternates between the two smaller squares.

I do have 2 or 3 other WIPs as well, but unfortunately no photos at the moment (and I haven’t really touched them for a while), so I guess I’ll only post them if I actually do work on them.

The problem with eating…

Had I remembered to add the picture to my post yesterday, you would have noticed that one of my goals/habits is to eat breakfast.

(Here it is today) 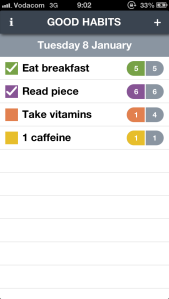 The problem for me with eating though, is that it makes me hungry – I know, that doesn’t make a lot of sense, but it is true.

As I’m sitting here, I had breakfast about 2 hours ago – granted, today’s breakfast wasn’t the most sustaining breakfast ever (a big mango), but I still am not impressed by feeling very very hungry as I’m typing this.

I find that they only things that keeps me full for a bit longer, are eggs and brown bread toast with cheese. Even bran cereal doesn’t keep me full for long :(.

Does anyone else have the same problem?

What do you have for breakfast?

Hope that you have a great year ahead!

Can you believe that the first week of the year has already gone by?

I can’t say I have made any concrete plans/goals after my last post, but I have a couple of random goals that are meant to become habits (if that makes any sense at all)

Shawni from 71 toes posted about an iPhone app called Good Habits. It is quite a nifty little app where you select a couple of habits you want to form and whether you want to be reminded about the habit on a daily basis.

The app then tracks your current steak and  your biggest streak of consecutive days where you have “completed” the habit.

Mine looks as follows at the moment:

So, to give an example, my current streak for taking vitamins is 1 day and the biggest streak is 4 days (I forgot to take some home for the weekend).

You can also go back in time to mark days.

Unfortunately the app cannot track goals such as “Do the laundry 3 times a week”, but that makes sense since the best way to form habits are to do them every day. (It would have been cool though).

I think each time a reach a steak of 30 with one habit, I will add a new habit.

Other than this, one big thing that I have recently decided I want to do this year, is to open an Etsy shop – I have read up on some ideas and suggestions, but would appreciate any advice.